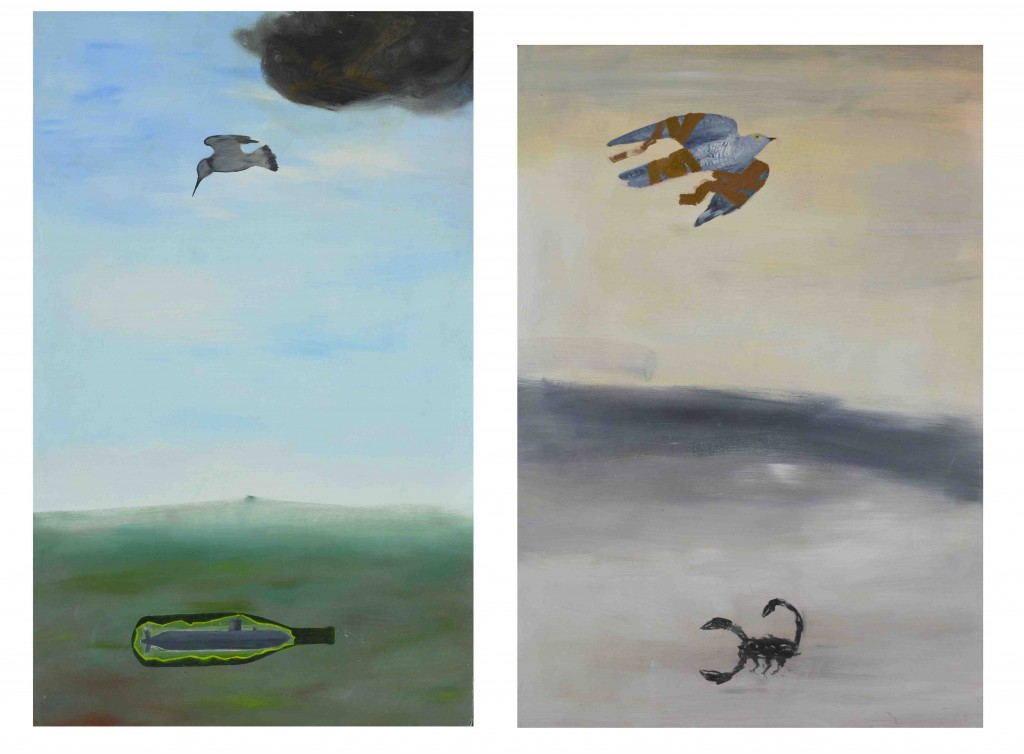 The two works selected from a from a recent body of work are compiled from notebooks made during visits to close family and relatives who left South Wales to live in Namibia and South Africa thirty years ago.  Visual elements are both intensely local and also remote and very exotic.   So it is that a ‘Welsh’ teapot can co-exist with an African Spoonbill. Strelitzia, the Bird of Paradise flower and the leek rest side by side around a hybrid ‘zebra’s’ neck. The paintings are unsettling in the way that jokes are unsettling. They offer visceral relief in the guise of cognitive dissonance. Puns, shocks, broken taboos and surrealism are key. Imagery is immediate and elements mix wit, colour and wild life.

The paintings are an exploration of emigration and dislocation.  Nature – a constant sauce of inspiration, is closely observed – animals, especially birds are depicted with remarkable fidelity. Objects are selected with mischievous care while humans are often treated satirically. Humour pervades the whole and ideas of Wales are both embraced and challenged.

One thing transforms into another.  Animals become puns and fables.  Nostalgic fondness for Wales lurches between affection, comedy, contradiction and confusion. Tommy Cooper’s fez manages to play its part as do rugby balls, bottle tops, chap-sticks, rosettes and knitting needles, often disconcertingly.  The identifiable but unlikely absurd and provocative images are full of contradictions.

Rees Davies’ work is always a curious mix of imagery – readily unpacking the artist’s memory onto a canvas as if he’s been stopped at a very unusual customs border.   Here any officers at the borders of memory are  subversive, remarkably open-minded and positively clownish in the way they process material.   These works have no problem allowing badly behaved symbols of personal memory out of their salon de refuses into remote and exotic locations. Such a combination makes for work that is settled (landscape), alert (the animals), tragic (the human story) and fragile (objects and their juxtaposition).

Colours are light, earth and sky go large, while objects – cigarette lighters, chewing gum, polo mints, love spoons and toy submarines are inserted with acerbic, dry and comic, daring timing.  The taste palate, like the colour pallet is bold.  Lines are agile and restless.  Animal imagery is dynamic, detailed and imbued with passionate, empathetic fidelity. This is a body of work -protecting and exposing, parodying and defending, lampooning and exalting the subject matter it chooses to portray.