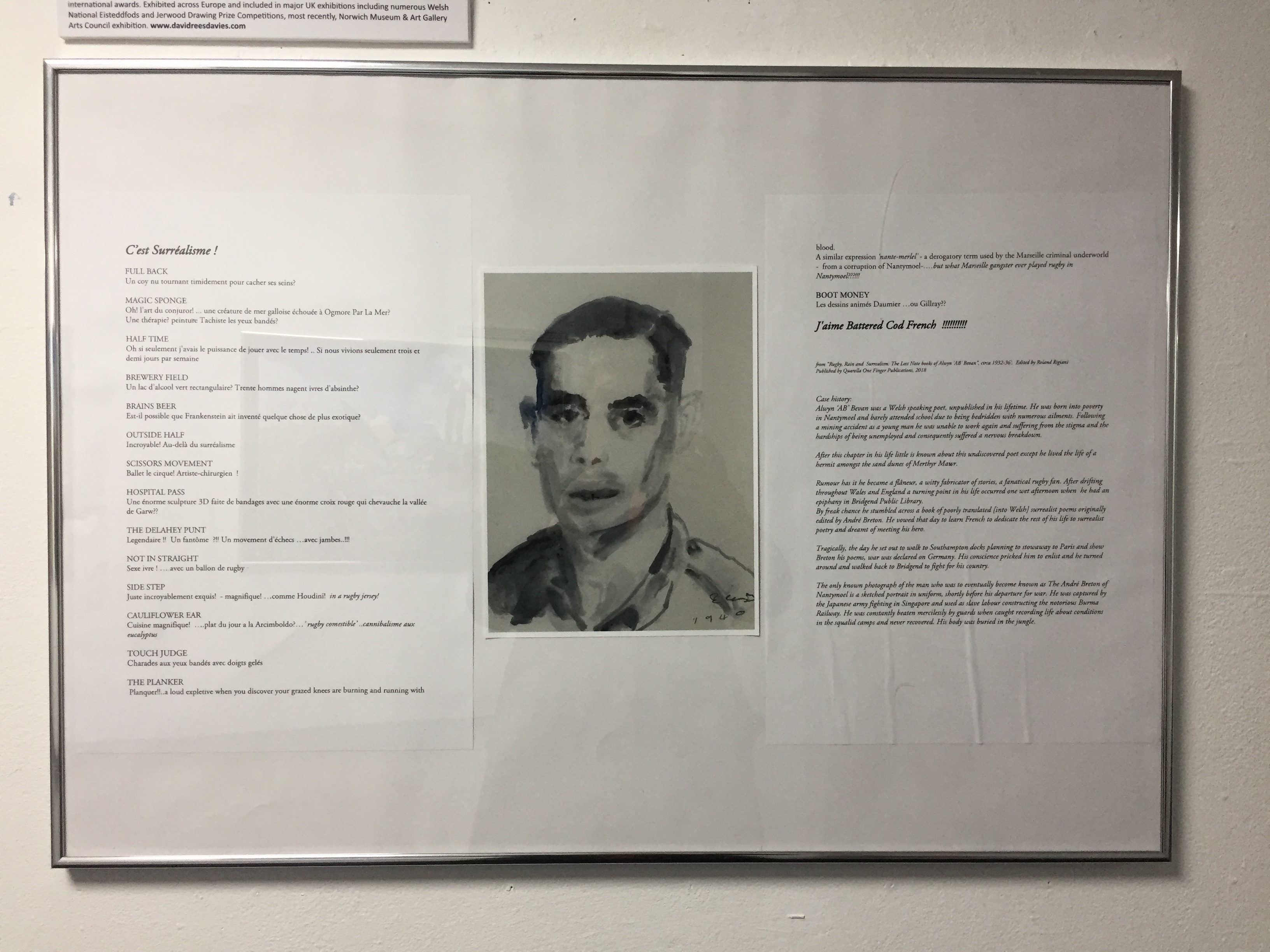 “The title of the show, Gogoneddus Ych-a-Fi or Glorious Disgust takes its inspiration from the writings of French surrealist André Breton, who established the spirit of revolt and the presence of the marvelous as a fundamental principle within the revolutionary practice of surrealism.  Artists were invited to reflect on the experience of marvel and revolt within a Welsh context and submit work accordingly.

Le Planquer’ An apology for a rugby pitch made from a flattened out slag heap- supposedly coined by a visiting Parisian rugby side touring south Wales.

Planquer!!..a loud expletive when you discover your grazed knees are burning and running with blood.

A similar expression ‘nante-merlel’ – a derogatory term used by the Marseille criminal underworld –  from a corruption of Nantymoel-….but what Marseille gangster ever played rugby in Nantymoel???!!!

French slang for a rugby pitch made of coal slag:‘un planqeur!’ supposedly coined by a visiting Parisian rugby side playing on Nantymoel’s playing field during a tour of south Wales.

Published by Quarella One Finger Publications, 2018

Alwyn ‘AB’ Bevan was a Welsh speaking poet, unpublished in his lifetime. He was born into poverty in Nantymoel and barely attended school due to being bedridden with numerous ailments. Following a mining accident as a young man he was unable to work again and suffering from the stigma and the hardships of being unemployed and consequently suffered a nervous breakdown.

After this chapter in his life little is known about this undiscovered poet except he lived the life of a hermit amongst the sand dunes of Merthyr Mawr.

Rumour has it he became a flâneur, a witty fabricator of stories, a fanatical rugby fan. After drifting throughout Wales and England a turning point in his life occurred one wet afternoon when  he had an epiphany in Bridgend Public Library.

By freak chance he stumbled across a book of poorly translated [into Welsh] surrealist poems originally edited by André Breton. He vowed that day to learn French to dedicate the rest of his life to surrealist poetry and dreamt of meeting his hero.

Tragically, the day he set out to walk to Southampton docks planning to stowaway to Paris and show Breton his poems, war was declared on Germany. His conscience pricked him to enlist and he turned around and walked back to Bridgend to fight for his country.

The only known photograph of the man who was to eventually become known as The André Breton of Nantymoel is a sketched portrait in uniform, shortly before his departure for war. He was captured by the Japanese army fighting in Singapore and used as slave labour constructing the notorious Burma Railway. He was constantly beaten mercilessly by guards when caught recording life about conditions in the squalid camps and never recovered. His body was buried in the jungle.