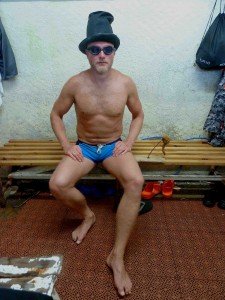 Recent photo taken of dear friend Leo Santos Shaw, artist-designer, in Brighton’s dankest Swimming Club. Known by fans of singer-songwriter Laura Marling as the enigmatic swimmer in her pop video ‘Rambling Man’. Leo back then was then sporting a Bonnie Prince Billy-esque beard and moustache, though always looking uniquely LSS. What many don’t know is that Leo very recently took part in a sponsored cross Channel relay swim to raise money for a Syrian refugee charity. The hat, incidentally, is the baton each swimmer mid Channel handed  to one another that amazing day. It’s one of the hundreds of bizarre findings Leo makes diving under the Brighton Pier. Sitting to his left is a curious furry creature on a rusty spring, which we guess is from one of the pier’s shooting arcades from around the time when real Pinkys were idling their  time and then tossing over the side.