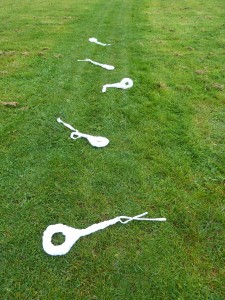 Saturday afternoons have had a special fascination for me since my teens when after a game of football on a flattened out coal tip in the freezing rain I used to catch the Nantymoel and Garw buses back to Bridgend (or from Indian Country to Civilization as they cruelly called it back then). Art student days in Cardiff and Manchester evolved into gallery visits and places of archeological curiosity. (O shit, I’m beginning to feel like an old man writing his memoirs).

It dawned on me that all the travelling [I’d learnt to drive and bought a very old, cheap Austin 1100], looking at art and things that inspired me meant I wasn’t actually making art myself. So, curiously, I began making small 3D sculptures…a change of working from my normal painting, drawing, photography and filmmaking….I tried to envisage in three dimensions Edward Lear’s Dong’s enigmatic bandaged  snouts by means of plaster of Paris and wire. Cardiff National Museum I have a lot to thank you for.

Thirty three years later I’m spending Saturday afternoons picking up where I left off. However, this time these ‘props’ for my Southerndown-Ogmore Photo shoot take on a different significance. Maybe it’s because I’ve written 700 words for a forthcoming section for Planet International; the bandaged objects seem to echo the Mari Lwyd my Uncle Roger wore – an unusual cream bandaged type……but also reminiscent of The Invisible Man…..An A&E waiting room. I accidentally spilt concentrated red watercolour over two of them [in my kak-handed fashion] and things got decidedly weird.

All will be revealed in the August Issue.