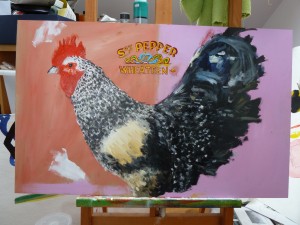 Rose and Dan’s superb cockerel. He struts his stuff around the beautiful Broadland home of Wheatfen, south east of Norwich.Wheatfen is the former home of Ted and Phyllis Ellis…now adjoined to to Ted Ellis Trust.

When I saw him last month, lord of his manor, huge and all alpha male and strikingly handsome, his harem never too far from his shadow,  I had to draw him- so I grabbed a large felt tip pen and an old note book from my car. Six or so attempts later (cockerels don’t stay still for more than a few seconds) I had enough grasp of something of his character…..I couldn’t wait to get back to my studio and paint him. I hope Ted, who was quite an accomplished draughtsman as well as a celebrated botanist would have approved.